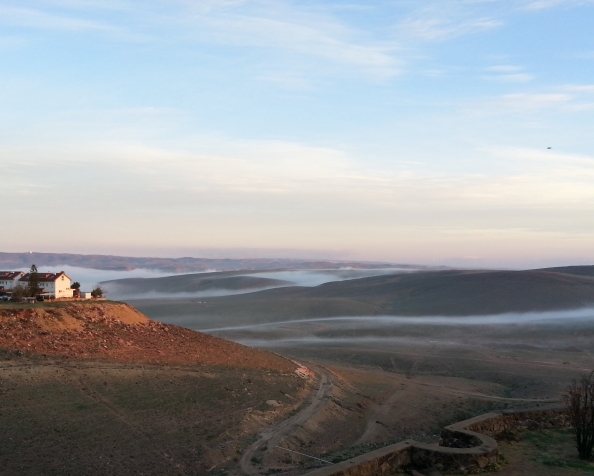 In October of 2016 our Aliyah experience began.  We had nothing to start with.  No papers, no proof.

I believed I and my husband were to make Aliyah.  So I believed what was in my heart to move forward with the process.  I believe if HaShem wanted me here He would provide the necessary papers I would need.

I had help in the US from family members who helped with research and made request to the different agencies of the papers I would need.

To my amazement my mother had done a family history and some of the information I needed was included in her research.

Then I had to get the apostilled documents.  I only had time to get one original US apostille and that was for my birth certificate.  The rest of the papers, back ground checks were official documents but they were not appostilled.

When I received them (the papers) here in Israel I went to a notary here and he notarized they were official documents and then I went to the court where a judge apostilled them.  I submitted these papers to the Ministry of Interior and they were accepted, at first.

We waited through November, no response.

We went to the Ministry of Interior in December, no answer.

Our second visa was about to expire in the beginning of January so we went again to the Ministry of Interior.  I was told at this time a needed a rabbi letter.  The clerk was also very rude to my husband.  He renewed our visa for another 3 months at the cost of 175 NIS each.  Which now we had paid for the third time.

Faced with a need for a Rabbi letter I was forced to jump another hurdle.  I didn’t know a rabbi.  I didn’t know how I was supposed to get a rabbi letter.  I was raised secular so this required me to do more research and pressing in.  I began with my mother.  Where did she go synagogue when she was a child?  She remembered after some time and speaking with her sister.

When I went to locate that synagogue on the internet I found it was closed.  It had merged with another synagogue many years earlier.  I contacted the new combined synagogue and found out the rabbi was on vacation…for 6 months! Now what??  I asked the secretary if she knew of another rabbi I could speak to and she recommended one in a nearby Shul in the same city.

I called this Rabbi and told him my dilemma.  He asked me to send the records I had and he would review them and write me a letter!  This was a miracle!

The Rabbi wrote me the letter.  He sent a copy by email and mailed the original directly to the Ministry of Interior.  They didn’t get it.  It was returned to him.  So, then I had him mail it to me.  Again, it didn’t get to me.  Third time I had him mail to another person and we finally received it after it didn’t matter because by this time the Ministry of Interior decided to deny my Aliyah on the basis of not showing proof of enough Jewishness.  Even though, they had a faxed copy of the rabbi letter.  They additionally told us we had to leave the country and refile from outside of the country.  This was done very deceitfully.  The clerk told us our papers had arrived and he needed proof of where we lived so he could give us our papers.  So we got the proof and rushed into the Ministry offices expecting to be approved only to be handed a denial letter.  It was very disappointing to say the least.

Major problem, we didn’t have anything to go back to in the States.  We prayed.  We felt very strongly we were to stay and fight.  We went to a couple of attorneys.  They wanted a lot of money to file an appeal; which we didn’t have.  We were also advised that if we filed an appeal we would not have to leave Israel.  So I put together an appeal and filed it with two different offices in the Ministry of Interior.  I faxed it, I sent it certified letter and received no response from them.

I made phone calls.  I had attorneys call.  I had Jewish agency call.  I had Nefesh B Nefesh call.  Nothing.  It was dead.  This went on for months.  There was also something else that was going on.  People would make attempts to help us and then suddenly drop us like a hot potatoe.  No explanation.  Just nothing.

In the meantime I ask the Rabbi who had wrote my first letter to rewrite a new one that had more information in it.  (Listed in Rabbi letter blog)

We had been living by faith all this time.  We had run out of funds months earlier.  People let us stay in a room in their apartments.  This was really getting wearisome.  We moved to a different part of Israel in May and was able to get into an apartment.  Again, we had to figure out how we would pay the bills, but HaShem supplied the funds.  Odd jobs and goodwill from individuals in Israel, from other countries and family enabled us to press on.  We furnished our apartment with things people would throw out.  They discard a lot of good things here in Israel so my husband and I would fix things, clean them and use them.  I would need something.  I would pray and ask HaShem for it and then my husband would find it.  It was really awesome how Elohim was taking care of us.  Very personal.

Finally in November I was able to get through to the clerk in the Ministry of Interior and ask what did they do with all the papers we sent.  He said, “What papers?”  I was floored! They had been discarding everything I was sending right into the trash bin!  So because they never addressed that I made an appeal we were now illegally in Israel.  Yes, I had all the proof of everything I sent but that didn’t matter to them.

In the meantime I met a wonderful Israeli who helped translate my family history into Hebrew.  So now I had to fight fear and go into the Ministry of Interior with my papers once again.  I was concerned.  I didn’t want to be arrested but I couldn’t continue living in this state of limbo.  I had to have answers one way or another.

So I went with my Israeli friend to the Ministry office in another city since the one I had first gone to lied to me I didn’t want to deal with that clerk anymore.  Plus we had moved and they want you to go to the office where you live.

Although the Rabbi had written me a new letter I had never received it in the mail.  The Ministry of Interior wanted an original.  So this wonderful Rabbi sent by UPS the letter I needed.  The woman at the Ministry Office was upset with me for letting this go on for so long.  She was upset that I had put myself in such a situation.  I tried to show her all the papers I sent but she wasn’t interested.  They had closed my file back in March, which I had no idea, and I had to refile.

I gave her the new papers. The papers in Hebrew and my new Rabbi letter.  Within a week they had approved my Rabbi letter and asked for my appostille background check, which was already accepted and in the original file which they had.  Talk about frustrating! They didn’t accept what I had already submitted.  I had to mail my original back ground checks back to US to get them appostilled from there and sent back.  I sent them Nov. 27, 2017.  I didn’t received them back until February 1, 2018.  Talk about having to have patience.

In the meantime we experienced hurt by a close friend, someone who had been walking through a good part of this journey with us.  So it wasn’t just Aliyah it was more than that.  I know HaShem wanted all the glory.

During this process of waiting we ran out of money and food.  I put in some calls for help to people who are supposed to help with Aliyah.  No help.  No answers to text messages.  Just one person who got the picture that we needed help for the last leg of this journey.  She put out a call to help from people in other countries.  It was wonderful, amazing! People we didn’t know came to our rescue.  Money came in. Another woman paid our rent! HaShem is faithful!

I went into the Ministry of Interior on the next business day with my apostille papers and they were willing to give me my Tudot Zeut but not my husband.  I was going to wait for us both to get the papers but my husband insisted I get mine, so I did.

It has now been almost four weeks since I receive my papers and we still haven’t heard an answer on my husbands papers.  To me, this is not victory until we are both approved.

To God be all the Glory!  He has encouraged us and continues to encourage us as we press forward in this new life.  This is something He chose for us.  We did not choose it.  In the process we have seen God’s divine provision, protection, love and favor.

If HaShem has put in your heart to do something you must trust that He will bring it to completion.

There is a lot to consider when making Aliyah. You will be leaving behind all you know and become a part of a new country. A new way of thinking, speaking (Hebrew) and a new way of living.
%d bloggers like this: